Charles Evans, the outgoing president of the Chicago Fed

says the turning point came in August 2008, when he argued for an interest-rate increase out of concern over inflation, completely misreading the peril facing the financial system just weeks before the government stepped in to save Fannie Mae and Freddie Mac and Lehman Brothers Holdings Inc. collapsed.

Instead, the Fed held rates at 2% and by the end of the year they had been slashed to nearly zero as the global financial crisis tipped the US economy into the deepest recession since the Great Depression. 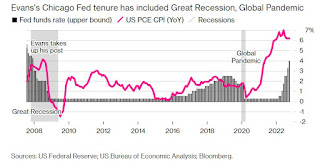 In 2012, the Fed formally committed to such an approach, declaring that it would keep interest rates near zero at least until unemployment had fallen below 6.5% or inflation rose above 2.5% -- a move which was dubbed the “Evans Rule.”