Swedish Business and the Defense of Free Enterprise, 1940–1985

UK has insisted that the EU’s ambassador should be seen as representing an “international organisation”, rather than a national ambassador

The EU official said he UK “would treat the European Union delegation in worse terms than any other country on the planet”.

A toxic mix of complacency, excessive risk-taking and market exuberance in financial markets is raising risks of a market correction, the International Monetary Fund

Underlying their risky bets, investors seem uniform in their belief that interest rates are going to be low as far as the eye can see.

“A sense of complacency appears to be permeating markets,” said Tobias Adrian, the director of the IMF’s Monetary and Capital Markets Department, in a blog post accompanying the international agency’s latest Global Financial Stability report.

We are wary of making the fashionable “this crazy bubble will burst soon” call.

Sure, we recently reduced our exposure to the bubblier parts of the global equity market, such as the US, but we have not moved wholesale to an underweight rating.

We’ve stopped dancing, we are standing closer to the door, but we haven’t left the party yet.

Equity rallies can run and run before a reckoning, killing careers of sceptical investors

On average, the associated equity indices almost tripled in the three years up to the peak and then at least halved in the two years afterwards.

Fund managers who didn’t own them got fired on the way up.

Those that did own them got fired on the way down.

The writer is chief global equity strategist at Citigroup

It seems like gambling has been going on in the market.

Everyone is shocked. Like the Police Chief in Casablanca.

How GameStop’s surge recalls ghosts of past trading catastrophes

”We can stay retarded longer than they can stay solvent”, som en person formulerade saken.

At issue is the debt brake, a measure enshrined in the German constitution, which limits the country’s budget deficit to just 0.35 per cent of gross domestic product.

CDU politicians insisted that the debt brake must be reintroduced, as planned, in 2022.

“We must return to sound budgets as soon as possible after the pandemic,” said Mr Ziemiak. “It’s only fair to future generations.”

Tech bulls argue that things are different to the dotcom days

“Every ladder is leaning against the same wall — interest rates and quantitative easing,” said Plaisance’s Mr Kozlowski. “If interest rates rise, there will be a real reckoning.”

The EU official saidt he UK “would treat the European Union delegation in worse terms than any other country on the planet”.

The EU official tasked with overseeing the post-Brexit deal with the UK, Maros Sefcovic,  told the Financial Times that the snub /London’s refusal to grant its ambassador full diplomatic status/ was “very important politically” and meant the UK “would treat the European Union delegation in worse terms than any other country on the planet”.

Screaming stock rallies and wild speculation by have-a-go amateur investors are stirring concerns among market veterans over a bubble to rival anything seen in the past century.

China’s co-operation is crucial to the future at a time when climate change threatens the livelihood of all humanity.

In January 2008, as the subprime crisis unfolded, Davos buzzed with confidence

To be fair, the forum’s 54-page Global Risks Report did include two paragraphs on subprime mortgages.

Warnings that rising deficits will reignite inflation and undermine the dollar have proved wrong for decades, so deficit hawks are increasingly easy to mock as crotchety old scolds.

The new view, expressed by leading figures from the IMF, academia and media, is that with inflation long dead and interest rates at record lows, it would be unwise, even irresponsible, not to borrow to boost the economy. The amounts — billions, trillions — hardly matter, especially not for the US, which still has the world’s most coveted currency.

Increasingly, the money printed by central banks goes to finance government debts. Many elites see this as fine

Instead of a path to freedom, low rates are a trap. They encourage more borrowing and rising debt, which drags productivity lower and slows growth. That makes the economy financially fragile, forcing central banks to keep rates low. Given today’s very high levels of debt, only a small increase in interest rates would make the debt burden unsustainable.

Joe Biden ushers in the Keynesian inflation era of the 2020s

My conclusion: the Federal Reserve will be on the warpath much earlier than widely assumed; dollar bears will be disappointed again; and Wall Street faces a cold douche, a sharp correction before the long bull market of the Roaring Twenties gets going

“As with frogs in water that is slowly being heated to a boil, investors are being conditioned not to recognise the danger.”

Seth Klarman, the founder of hedge fund Baupost Group, has told clients central bank policies and government stimulus have convinced investors that risk “has simply vanished”, leaving the market unable to fulfil its role as a price discovery mechanism.

“With so much stimulus being deployed, trying to figure out if the economy is in recession is like trying to assess if you had a fever after you just took a large dose of aspirin,” he wrote.

Frontex is an important milestone in the bloc’s efforts to create functioning institutions that can implement its security and foreign policy objectives. The US, some European officials like to point out, had a coastguard before it had its own navy.

Critics, by contrast, see Frontex as the spearhead of a militaristic “Fortress Europe” strategy

The camera lingers first on the EU’s circle of stars insignia and then shifts to a close-up of the officer’s side cap, styled similarly to those used in the US military and French police. The man salutes in front of a logo for the armed force he represents: the Frontex European Border and Coast Guard.

10.3m users had their electricity abruptly shut off in Mexico City

Cutting off users was necessary to avoid pulling the plug on the entire national grid.

The culprit was renewable energy. Because renewable power is intermittent — sunshine and wind are not constant — and must be backed up by other sources, it puts strain on the system.

Why renewables can’t save the planet Michael Shellenberger TEDxDanubia

ECB is buying even more Italian bonds than ever before.

bringing its total holdings to €529 billion.

Then, of course, there are the banks.

Government-aided rebound would come in stark contrast to what happened during the 2007 to 2009 recession.

Back then, Congress’s biggest package to counter the fallout of the downturn was the $800 billion American Recovery and Reinvestment Act, passed in 2009.

At the time, concern over the deficit helped to stem more aggressive fiscal policy responses.

But economic thinking has undergone a sea change since then.

As a result of last year’s shock, the US is likely to exceed its 2020 targets under the Copenhagen accord to cut emissions by 17 per cent from 2005 levels

Greece’s GDP was still 25% below its pre-crisis peak, with unemployment above 20% for most of the last decade.

Greece’s no show recovery is unparalleled in modern history. Even amongst the most severe Depressions.

Five years after the Great Depression US GDP per capita had risen by 35%, likewise after Argentina’s 2002 crisis it was up by 45%.

Over the last year there has been a veritable explosion of the money supply.

The current monetary expansion shows itself in large increases in the bank deposits of households. Once they are in a position to spend this money, they are most assuredly going to do so.

There is no inevitable direct link between the money supply and inflation. Normally, the link operates through aggregate demand.

Just as the monetary authorities can stoke the inflationary fires so they can also dowse them. But will they? That is a subject for another day. 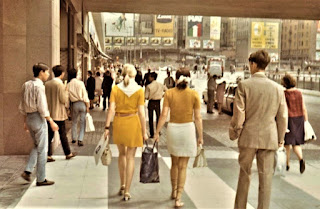 What was the best-performing asset class in 2020? US inflation-linked bonds

If you think “tech stocks” or “bitcoin”, think again. Instead, as the Bridgewater hedge fund recently wrote to its clients, “among the more interesting and least recognised outcomes” of 2020 was that US inflation-linked bonds beat other assets by delivering a 35 per cent return, on a risk-adjusted basis, as investors hedged against inflation risks.

In recent years, most investment portfolios have been constructed on the assumption that interest rates and inflation will stay low indefinitely.

“there could be a taper tantrum”, adds Mr Dudley, referring to the 2013 market swings that occurred when Ben Bernanke, then Fed chair, gave the mildest of hints that the central bank might cut, or taper, its QE programme

Biden’s administration will include many veterans of 2008. But the world and the US of 2008 no longer exist.

We will eventually get to net-zero emissions. Solar and wind energy, as well as storage batteries, keep getting cheaper.

We just won’t get there in time to prevent ruinous climate change.

Biden’s administration will include many veterans of 2008. But the world and the US of 2008 no longer exist’. Simon Cooper

Biden, 78, needs a playbook for a new age. Here are just a few of the dizzying, distressing, interconnected changes of the past 12 years

The 10-year break-even rate, derived from prices of US inflation-protected government securities, now sits above 2 per cent for the first time since late 2018.

European scientists concluded 2020 matched 2016 as the world’s hottest on record.

Global temperatures are now just 0.25 degrees Celsius shy of limits set by the Paris climate accord

The Copernicus models combine data from scientists in the U.K., France, Germany, Italy and the U.S.

Investors borrowed a record $722.1 billion against their investment portfolios through November

It is not surprising that current and retired central bankers feel threatened by Modern Monetary Theory. With deep roots in the Keynesian tradition and a consistent commitment to achieving full employment, MMT shows that good economics and sound policy doesn't have to be shrouded in obscurantist cant.

US trade deficit in August was widest in 14 years

The US trade deficit rose to $67bn

A buyer requires a seller there can be no “sidelines

For every buyer, there must be someone willing to sell. As noted by Clifford Asness:

“There are no sidelines. Those saying this seem to envision a seller of stocks moving money to cash and awaiting a chance to return. But they always ignore that this seller sold to somebody, who presumably moved a precisely equal amount of cash off the sidelines.”

Every transaction in the market requires both a buyer and a seller, with the only differentiating factor being at what price the transaction occurs. Since this is necessary for there to be equilibrium in the markets, there can be no “sidelines.”

We will eventually get to net-zero emissions. Solar and wind energy, as well as storage batteries, keep getting cheaper.

We just won’t get there in time to prevent ruinous climate change.

Global warming. Never has so much been promised by so many governments, businesses and financial institutions.

This splurge of commitments to tackle climate change is welcome, but it risks being confused with something it is not: action to cut emissions at the scale and pace needed to meet the goals of the 2015 Paris climate accord.