It was the morning after the night before and I was riding an elevator to the 13th floor in the European Commission.

Two men smiled at each other and one said "I hear Greece has been saved". "Couldn't be better," beamed the other, before disappearing into the vastness of bureaucracy.
It felt like news shared from a distant front: "Bastogne has been relieved" or "Malta is holding out".
Gavin Hewitt, the BBC's Europe editor blog 26 March 2010

In 1940, Malta found itself at the heart of a raging battle between Allied and Axis powers for naval control of the Mediterranean.

The low-for-long era is over. BoJ and ECB both changed their mantra

from whatever it takes to less is more targeting steeper yield curves and the transmission mechanism of stimulus to the real economy,

Monetary stimulus without appropriate fiscal action
encouraged misallocation of resources to zombie firms and banks that should otherwise restructure;
created asset bubbles in high dividend equities, property and precious metals, as well as art and collectibles;
and widened the gap in relative wealth between the haves and the have-nots.

När fastighetsskatten stiger. Owner's equity in US back to level of 2007. 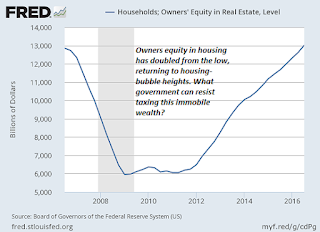 Party Like It’s 19,990
So. Is the smart money with ETFs? - the most successful investment innovation of our time.

The blog kept by the fund manager John Hussman is much followed, even if it is also much derided.

He has been incorrectly bearish on US stocks for much of the post-crisis era. But it would be unwise to ignore him.
John Authers FT 21 December 2016
Upplagd av Rolf Englund kl. 12/21/2016 Inga kommentarer:

Noah Smith: Here’s a list of 10 excellent economics books and papers I read in 2016 that should be accessible to the general public.

When Italy adopted the euro in 1999, he had argued that Italy would change from being an economy with a high probability of many currency devaluations to one with the certain probability of eventual bankruptcy.
John Mauldin 7 December 2016
Upplagd av Rolf Englund kl. 12/20/2016 Inga kommentarer:

Promoting economic growth and employment is one of the Fed’s core missions, assigned to it by Congress in (I believe) 1974.
It was a triumph of Keynesian thought over Hayek’s beliefs; and despite all evidence to the contrary, most market participants still think that monetary policy is the magic that drives the business cycle.
Policy is supposed to moderate the boom-and-bust cycle and lift the economy out of recessions within a reasonable period.
On that point, monetary policy has failed miserably. We’re seven years out of recession and have yet to see GDP growth break above 3%.
The Fed’s answer in this week’s episode was to throw in the towel: Expect more of the same.
John Mauldin 19 December 2016

Today’s young Wall Street hotshots have never seen anything like that. To them the jump from 0.5% to 0.75% must seem like a big deal. It’s really not.

If the chart above were a heart monitor readout, we would say this patient is now dead and that last blip was an equipment glitch.

If we, the liberal establishment, fail to do this, the populists will do it for us.
Wolfgang Münchau, FT 18 December 2016
Upplagd av Rolf Englund kl. 12/19/2016 Inga kommentarer:

War of words breaks out between officials over austerity measures

The Eurogroup is the real villain in Greece today, not the IMF

Greece was patently insolvent. It needed a textbook debt write-off to restore viability.
This was blocked because everybody feared a calamitous chain-reaction through Portugal, Ireland, Spain, and Italy.

Greece cannot be condemned to austerity for ever

Most econ models are still based on rational expectations, the idea that people don’t systematically make errors when forecasting the future,

A small but increasing number of papers are asking how markets would behave if investors improperly extrapolate recent trends into the future.

as soon as this weekend, wiping out investors in a dramatic escalation of the country’s banking woes and political crisis.
The Italian treasury has been left with no other option after the European Central Bank refused to give the crippled lender more time to clinch a deal with private funds.
Ambrose, Telegraph 9 December 2016
Upplagd av Rolf Englund kl. 12/11/2016 Inga kommentarer:

Era of quantitative easing is drawing to a close

Niall Fergusson about Brexit: I'm going to admit that I was wrong

He also issued a scathing critique of the EU, which he said

Rogoff: If the US economy really does have massive quantities of underutilized and unemployed resources

the effect of Trump’s policies on growth could be considerable.

In Keynesian jargon, there is still a large multiplier on fiscal policy.

It is easy to forget the biggest missing piece of the global recovery is business investment, and if it starts kicking in finally, both output and productivity could begin to rise very sharply.

Those who are deeply wedded to the idea of “secular stagnation” would say high growth under Trump is well-nigh impossible. But...
Kenneth Rogoff, Project Syndicate 7 December 2016 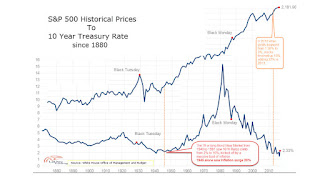 "default risks are rising because more and more corporations are relying on the short-term money market to raise the finance they need to repay existing debts."

... 8. If you are a policymaker or politician, plan to eventually retire from the Fed/Congress/Executive Wing and claim it'll be up to the Millennials now.

Remarkably, real domestic demand in the eurozone was 1.1 per cent lower in the second quarter of 2016 than it had been in the first quarter of 2008.
This extreme weakness of demand should not have happened.

It represents a huge failure.

Politicians seem unwilling to implement it.

Why did 17.4m Britons ignore the advice of three former prime ministers, the Bank of England governor and the vast majority of businesses?

How were they persuaded to vote for something they knew could make them poorer?

Mnuchin like a throwback to heavyweight predecessors such as Robert Rubin, Lawrence Summers and James Baker III.

Mr Mnuchin plans that would restore the status of the Treasury department as the vital driver of economic policy.
For those who can remember the pre-crisis era, it felt like a throwback to heavyweight predecessors such as Robert Rubin, Lawrence Summers and James Baker III.