15 summits. Maybe more. A long grinding, gruelling marathon to hang on to a European dream.

The eurozone crisis has been blowing for two years. It has not abated. In that time there have been, at least, 15 summits. Maybe more.

A long grinding, gruelling marathon to hang on to a European dream. 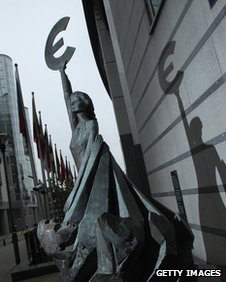 
Unconditional surrender
The use of the term was revived during World War II at the Casablanca conference when American President Franklin D. Roosevelt sprang it on the other Allies

It has been estimated that it helped prolong the war in Europe through its usefulness to German domestic propaganda that used it to encourage further resistance against the Allied armies, and its suppressive effect on the German resistance movement since even after a coup against Adolf Hitler


The ECB’s primary inflation mandate, which it interprets as keeping inflation just below 2 percent in the medium term

Once this is achieved, the rulebook also allows it to
“support the general economic policies” aimed at delivering high growth, social protection and economic convergence

The euro is a macro-economic weapon of mass destruction


Each evening, as darkness descends on Athens, police in riot gear wait in buses that line the side streets of the city centre. Some fidget with mobile phones, others stare into the night.

What they are waiting for, nobody is sure. But everyone in the Greek capital agrees something could happen any time.
More here

Voters get angry, and sometimes violent, when their own politicians let them down. But when they feel controlled and humiliated by foreigners, they become totally enraged.

“Fiscal union” advocates will also need, when the time comes, to send out the eurozone riot-police.
More here

Commentary: One default is an accident; two is a systemic crisis

It's now up to China to save capitalism - Telegraph

It's now up to China to save capitalism - Telegraph
Upplagd av Rolf Englund kl. 1/26/2012 Inga kommentarer:

Iran has threatened to pre-empt a European embargo on its oil by halting its exports to the region immediately, a move that could hit economically weak southern European countries.

The European Union this week approved a ban on crude oil imports from Iran from July 1, a five-month delay designed to give Greece, Spain and Italy time to find alternative supplies.

Athens buys about a third of all its oil supplies from Iran.

Sardelis och The Ticking Euro Bomb, How the Euro Zone Ignored Its Own Rules

In 1999, the Socialist government in Athens established a "Public Debt Management Agency," naming Christoforos Sardelis as its director.

Mohamed El-Erian on Capitalism: To fail on one count is a problem

The crisis in capitalism is caused by two distinct failures: the inability of the system to deliver sustained prosperity through economic growth and jobs; and the perception that it is grossly unfair and socially unjust.
To fail on one count is a problem.

Yet many would have probably glossed over that, especially those who  –  erroneously in my view  –  believe that there are rigid trade-offs between efficiency and equity.

However, to fail on both counts, and to do so in such a spectacular manner, is indeed a “crisis.”

It raises legitimate questions about the model itself.

Governments have been blamed for the financial and political chaos of 2011.
Public trust in government has suffered a severe breakdown across the world,
BBC 23 January 2012


Investors need to prepare for three possible outcomes to the European debt crisis,
including the worst-case scenario in which the monetary union is left in tatters,
Pimco's Mohamed El-Erian, the co-CEO of the the world's largest bond fund manager
CNBC, 29 Nov 2011

Iran accused Europeans on Monday of waging "psychological warfare" after the EU banned imports of Iranian oil, with nice video of Strait of Hormuz

If the rate is too low - say less than 3.8% - the investors will cry foul and insist the deal is no longer voluntary.

The sticking point is the interest paid on the new bonds, bearing in mind they will not mature for 30 years.

If it isn't voluntary then Greece is in default.


Greece was closing in on an initial deal with private bond holders on Friday that would prevent it from tumbling into a chaotic default but lose investors up to 70 percent of the loans they have given to Athens.

MSLGROUP – Trusted Advisors and Creative Storytellers for the Conversation Age

Here is the latest money supply chart from the Banca d'Italia. Just look at M3. Horrendous. 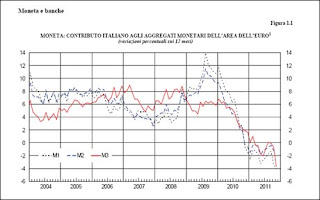 
The euro is pushing Italy into depression

How to Re-Open the Strait of Hormuz after Iran Shuts It | Battleland | TIME.com

How to Re-Open the Strait of Hormuz after Iran Shuts It | Battleland | TIME.com
Upplagd av Rolf Englund kl. 1/18/2012 Inga kommentarer:

In February 1947 the British government – bankrupted by the war and beset by a harsh winter – told America that it could no longer afford to aid Greece, which was on the brink of economic collapse and civil war.

President Truman went before Congress and requested $400m in aid for Greece, pledging that America would now “support free peoples who are resisting attempted subjugation”.

A few weeks later, the US announced the Marshall Plan

Perhaps the most interesting reason for the downgrade was Standard and Poor's judgement (read it here) that austerity alone might be self-defeating.


The "cult of austerity" has always been controversial. The doubts are increasing. There are those who say that Greece is now trapped in a spiral of decline.

The Washington Post last week asked whether austerity was "killing the Greek economy".

The fear extends to Italy, Portugal and Spain.

Austerity is squeezing demand just as countries are heading into recession. Unemployment is already rising, leading to greater spending on benefits and a decline in revenue from taxation. That forces the countries to borrow more, so forcing up accumulated debt.

The German chancellor remains a believer.

This weekend she said that Greece could rebuild its economy despite austerity.

She accepts that spending cuts alone won't work, but she believes that structural reforms have to be forcefully implemented although they take time. 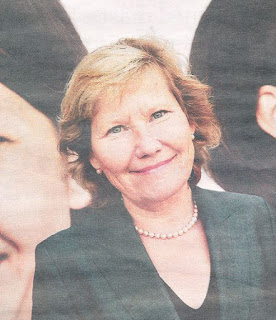 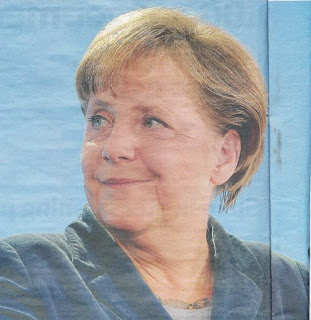 The S&P downgrades of France and other Eurozone governments were worse than many expected, but they were expected.

What's most interesting, to me, is not the fact that S&P has done this, but the stated reason.


Why? Because, in essence, a major ratings agency has now joined the side of those who say fiscal austerity, as the central plank of the response to the eurozone crisis, is doing more harm than good.


The company's statements explaining its various decisions are worth reading in full.

Stephanie has been a reporter at the New York Times (2001);
a speech writer and senior advisor to the US Treasury Secretary (1997-2001);
a Financial Times leader-writer and columnist (1993-7);
and an economist at the Institute for Fiscal Studies and London Business School.


She has won numerous awards, including the 2010 Harold Wincott Award for online journalism.


Her father was Michael Flanders, of the 1950s and '60s musical comedy duo, Flanders and Swann.

What is more interesting than just the decision by S&P itself is the reasoning.

“We also believe that the agreement is predicated on only a partial recognition  of the source of the crisis: that the current financial turmoil stems  primarily from fiscal profligacy at the periphery of the eurozone.
In our view, however, the financial problems facing the eurozone are as much a consequence of rising external imbalances and divergences in competitiveness  between the eurozone's core and the so-called "periphery".

As such, we believe  that a reform process based on a pillar of fiscal austerity alone risks becoming self-defeating, as domestic demand falls in line with consumers' rising concerns about job security and disposable incomes, eroding national  tax revenues. “ 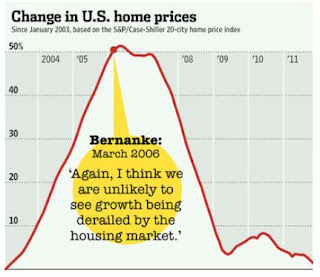 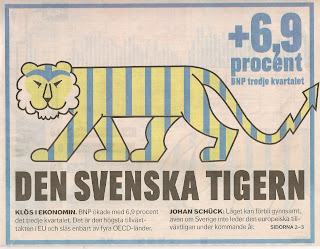 Rescuing Europe From Debt Crisis Begins With Men of MIT

Three of the six banks are led by economists who studied or taught at the Massachusetts Institute of Technology in the late 1970s and early 1980s.

Then, as now, the emphasis was on what former MIT professor and now Bank of Israel Governor Stanley Fischer describes as “economics about the real world.”

Other monetary policy makers who have passed through MIT’s doors include Athanasios Orphanides, head of the Central Bank of Cyprus, Duvvuri Subbarao, governor of the Reserve Bank of India and Charles Bean, King’s deputy in the U.K.

The biggest danger is Greece
Greece has a €14.4 billion bond due on March 20th. 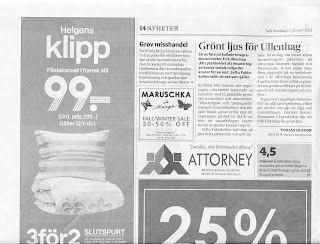 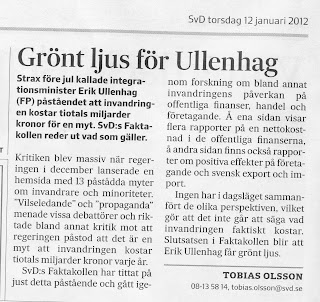 The Eurofanatics should join the Marxists in the dustbin of history

How on earth did Lord Howe conclude that the whole of Europe could use the same currency and the same interest rate, with minimal fiscal transfers?

There is one possible answer. Geoffrey Howe may well have believed that monetary union would lead inexorably to fiscal union and thus to political union.

If so, we should inquire why he – and the other Eurofanatics – failed to share that insight with the British public, whom they were trying to persuade of the merits of the single currency.

We should also remind Lord Howe and his friends that before adding the roof, it is a good idea to build the walls.

Most complex political questions do not lend themselves to an absolute distinction between right and wrong. Even the losing side’s case will have some merits. The euro is an exception.

Unless the eurozone was about to become a single country in short order, the single currency could never have worked. Never. It was always a train crash in the making.

So the Eurosceptics who pointed this out were 100 per cent right: Geoffrey Howe and his friends, 100 per cent wrong.

We must remember that for 2,000 years, most intellectuals worked for one of the Churches. Many were scholars, some of them positively saintly, who spent their lives in enhancing a gentle faith.

But there were plenty of others. The Spanish Inquisition was established and manned by intellectuals. So were most of the heresy hunts and persecutions.

Although we think of Thomas More as a subtle and witty man, he was capable of extreme cruelty against those whom he regarded as heretics. He behaved in such a way, because he thought that he was saving souls.

Iran will in the “near future” start enriching uranium

Iran will in the “near future” start enriching uranium deep inside a mountain, a senior Iranian official said Sunday,

Nice pic of Carrier too 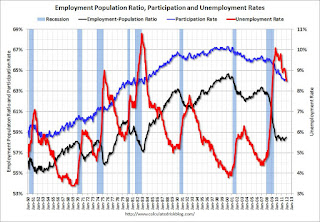 The biggest buyer of Iranian oil, China, is “unlikely” to be affected and has already expressed opposition to what it termed “unilateral” sanctions against Iran.

The US Treasury Department said in a statement that Treasury Secretary Timothy Geithner will travel to Beijing and Tokyo to discuss “continued coordination with international partners in the region to increase pressure on the Government of Iran."

Both former Gov. Romney and former Sen. Santorum are hard critics of the Obama administration’s handling of the country that Romney sees as America’s largest threat.

Both men have said they would bomb Iran if that country persisted in its stated drive to develop nuclear weapons.

Various Iranian officials in recent weeks have said they would blockade the strait, which is only 21 miles wide at its narrowest point, if the United States and Europe imposed a tight oil embargo on their country in an effort to thwart its development of nuclear weapons.


That did not stop President Obama from signing legislation last weekend imposing sanctions against Iran’s Central Bank intended to make it more difficult for the country to sell its oil, nor did it dissuade the European Union from moving toward a ban on Iranian oil imports.

Can Iran Close the Strait of Hormuz? | Battleland | TIME.com

Since it doesn’t have nuclear weapons yet, Iran is playing the lone trump card in its hand: threatening to shut down the Strait of Hormuz through which Persian Gulf oil flows to fuel much of the world’s economy. Iranian navy chief Admiral Habibollah Sayyari told state television Wednesday that it would be “very easy” for his forces to shut down the chokepoint. “Iran has comprehensive control over the strategic waterway,” he said as his vessels continued a 10-day exercise near the strait.