Mario Draghi Has to Explain One Last Thing So what happened, exactly, at Monte Paschi?

Mario Draghi, who steps down as president of the European Central Bank in October, deserves praise for almost single-handedly saving the euro.

But thorny questions still remain about how well he oversaw the region’s banks, and one in particular: Banca Monte dei Paschi di Siena SpA.

As governor of the Bank of Italy between 2006 and 2011, he was ultimately responsible for regulating it.

Crucially, the central bank signed off on Monte Paschi’s mammoth takeover of a rival at the peak of the financial crisis.

It was a deal that eventually left the world’s oldest lender mired in scandal and bailouts.

with a big mandate: to poke holes in the most basic assumptions that central bankers make -- which can lead to big policy mistakes when they’re wrong.

The financial crisis offers plenty of illustrations. The Fed got housing markets wrong before the crash, and its estimates of labor resources in the recovery have been off, too.

McConnell’s conclusion after 2008 was that economics as practiced at today’s central banks has embedded blind spots.

A Decade of Low Interest Rates Is Changing Everything

Plender: Why markets need to heed the lessons from the 1970s

It is, by now, a familiar statistic, but one that retains its ability to shock: more than $13tn of government bonds are trading at negative yields.

But while this may strike many as unnatural, it is not unprecedented. In the Great Inflation of the 1970s real interest rates were extremely low or negative across much of the developed world.

The music plays on for now.

The US Treasury has been running down its GTA account for months to pay salaries and keep the government going. This has been a net injection of money into the US economy.

It is akin to QE and has overwhelmed the effects of quantitative tightening (bond sales) by the Fed pulling in the opposite direction.

Or put another way, it has masked the underlying withdrawal of dollar liquidity.

US debt ceiling
“This agreement is a total abdication of fiscal responsibility by Congress and the president,” said Maya MacGuineas, president of the Committee for a Responsible Federal Budget, a Washington advocacy group.

Following the 2008 global financial crisis, central banks bet that greater activism on the part of other policymakers would be their salvation, helping them to normalize their operations.

But that activism never came, and central bankers are now facing a lose-lose proposition.

They hijacked the Fund to rescue monetary union at a time when the eurozone had no lender-of-last resort - due its own recklessness and political paralysis - and had therefore exposed a string of sovereign states to bankruptcy.

Larry Kudlow offered effusive praise last week to Alexandria Ocasio-Cortez after her quizzing of Jay Powell in Congress. She asked Mr Powell about how the Phillips curve seemed to have vanished over time.

Any convergence between them over the direction of policy risks being grounded in wildly diverging theories of how the economy works, both probably wrong.


The Fed seems finally to have given up on the Phillips trade-off. So far, though, policymakers have no answers to the larger questions. And that leaves policy adrift.

Death of the Phillips curve - Nonsens.


If the economy takes off above Stall Speed the Philips Curve will be back.

The Law of Supply and Demand

Why does the global economy need rescuing after 10 years of non stop monetary stimulus?

the existential problems we are talking about (and neither of us use the word “existential” lightly) will resolve themselves in a highly tumultuous manner if we as a society don’t face them directly and soon.

Total federal debt is now $22.5 trillion plus another $3 trillion of state and local debt.

Annual deficits are running at an average of $1.2 trillion and growing.

Firefighting — Bernanke, Geithner and Paulson reflect on the financial crisis

Top policymakers look back on lessons learnt and mistakes made during 2008 meltdown.


Stanley Fischer said there was “no legal basis” for what the Fed did on multiple fronts after the collapse of Lehman Brothers.

The Dodd-Frank Act passed by Congress - when anti-banker sentiment was at its peak - prevents the Fed from acting freely as a lender of last resort...

The authorities may not rescue individual companies, or lend to non-banks, or offer blanket guarantees of bank debt and money market funds.

The lightning-fast action and $1.5 trillion of emergency loans that restored control in 2008 is no longer possible.

The monetary policy behind today’s low inflation will keep working until, suddenly, it doesn’t.

This makes me wish that I had a better understanding of monetary policy and inflation.

It also makes me wish that the people responsible for monetary policy had a better understanding than I have.


Robert J. Barro is Professor of Economics at Harvard and a visiting scholar at the American Enterprise Institute.

It’s never easy to identify the moment a hinge turns in history. When it comes to humanity’s first true grasp of the beauty, fragility and loneliness of our world, however, we know the precise instant.

It was on December 24, 1968, exactly 75 hours, 48 minutes and 41 seconds after the Apollo 8 spacecraft lifted off from Cape Canaveral en route to becoming the first manned mission to orbit the moon.

Could Los Angeles withstand a 'megaquake'?

Carrying these results over to the worst-case scenarios for Los Angeles, this suggest that almost all buildings could become uninhabitable and still satisfy the definition of success for the building code


Transportation, gas and electricity supplies, sewerage systems, water supplies and communications would all be affected.
Whether a modern civic society could operate under such conditions is questionable. At the instant of the USGS model earthquake, debris would close roads, extinguish traffic lights, water supplies would be cut off, and emergency responders would have difficulty operating.
Beyond that, the disruption of the supply chain also becomes an issue, pointed out Dr Jones. The move towards a "just in time" economy in grocery stores and elsewhere has introduced additional vulnerability.

1931 by Tobias Straumann — how things fall apart. The story of the end of Weimar Germany

With hindsight we date the onset of the Great Depression back to the Wall Street crash of October 1929. But that was not obvious at the time. At first it seemed the world economy might merely be entering a normal cyclical downturn.

It was in 1931 with the sequence of the Austrian banking crisis, the shutdown of the German financial system and then Britain’s departure from the gold standard that it became clear that this recession was, indeed, a major turning point in world history.

To win support for his deeply unpopular austerity measures, Brüning chose to parade his nationalist colours

Adam Tooze is the author of ‘Crashed: How a Decade of Financial Crises Changed the World’

Popular mythology in Germany has it that the Weimar hyperinflation of 1922-23 led directly to the rise of Hitler. This is not true.

You are the head of the European Central Bank

Congratulations on your appointment as President of the ECB.

On your shoulders rests the awesome responsibility to keep the trade bloc’s economies from melting down, collectively and individually. Piece of cake, right?

The CBO forecast that does not include a recession has total debt rising to over $33 trillion.

President Trump has never been a fan of the strong dollar.

And after beating around the bush for months by demanding a 50 bp rate cut and more QE from the Fed, it seems the president is now explicitly calling on the US to artificially weaken the greenback by any means necessary. 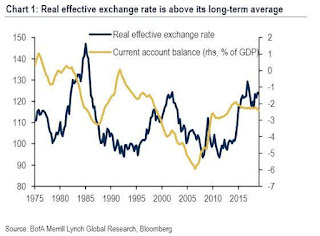 
It’s true that the use of wind and solar energy rose by double digits that year /2018/, but renewables are still just 13 per cent of global energy consumption.

Their share will increase, but fossil-fuel burning will increase too, as the world’s population grows, gets richer and consumes more energy.

You have to wonder how much longer Wall Street's incorrigible dip-buyers can deny the obvious. The Fed and its global convoy of central banks have flat-out ruined financial markets---meaning that they have become an unstable, unpredictable roller-derby divorced from the main street economy and uncoupled from the financial fundamentals.
Accordingly, the only remaining tools of navigation in the stock market are the fickle lodestar of momentum-chasing and the eternal hope for yet another round of monetary stimulus.
But the latter assumes that our monetary central planners know what they are doing, when, in fact, they constitute a posse of the financially deaf, dumb and blind, stumbling around in the monetary darkness.
After all, central bankers and economists even a few decades ago would have been at least at DEFCON 2 in response to the absurd yields posted in the bond markets this AM.
To wit, the 2-year Italian government bond yield fell into negative territory, while its 10-year bond at 1.79% is below even the meager 1.99% yield on the UST. Yet Italy is an ungovernable fiscal basket case with a 133% debt-to-GDP ratio and a population, labor force and economy which will be contracting as far as the eye can see.
By David Stockman. Posted On Tuesday, July 2nd, 2019

Growing concern at IMF over the long-term side-effects of interest rates close to zero
Some of the leading figures in central banking conceded they were flying blind when steering their economies.
Lorenzo Bini Smaghi, the former member of the ECB’s executive board:
“We don’t fully understand what is happening in advanced economies.”
Financial Times, April 17, 2013


Want to find out more about the jetstream?

The European Banking Authority said that the largest banks in the EU will have a total capital shortfall of €135bn to comply with reforms to post-crisis rules, dubbed Basel IV

What Will Cause The Next Recession - Joseph Stiglitz

and the trade-off from asset booms is becoming ever harder to justify.