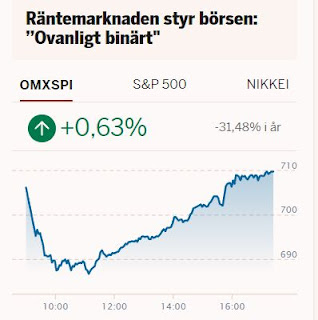 Don’t expect a quick pivot for anything short of a Lehman-style financial crisis. 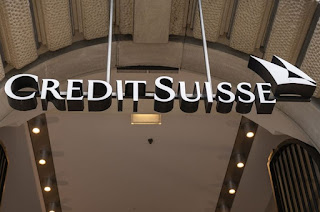 That explains the intense speculation about Credit Suisse that led to the release of a memo from its chief executive officer, Ulrich Koerner, on Friday. The key section reads as follows:

I know it's not easy to remain focused amid the many stories you read in the media – in particular, given the many factually inaccurate statements being made. That said, I trust that you are not confusing our day-to-day stock price performance with the strong capital base and liquidity position of the bank.

It’s never healthy when a CEO has to offer reassurance like this. 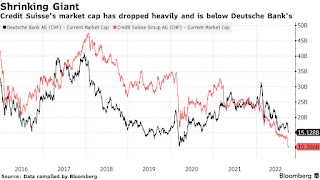 Credit Suisse’s market capitalization dropped to around 10 billion Swiss francs. The market value was above 30 billion francs as recently as March 2021.

Credit Suisse Chairman Axel Lehmann
Swissair was the national airline of Switzerland between its founding in 1931 and bankruptcy in 2002.
2 October 2001 saw an increased necessity for strong liquidity, as all suppliers insisted on cash payments of outstanding invoices following the request of payment delay announced the day before.
Cash reserves of Swissair filed on this day were barely sufficient to carry out the first morning flights. During the morning, fuel suppliers refused to fuel the waiting aircraft.
https://en.wikipedia.org/wiki/Swissair
Senior Credit Suisse executives spent the weekend reassuring large clients, counterparties and investors about the Swiss bank’s liquidity and capital position in response to concerns raised about its financial strength
FT 2 October 2020
https://www.ft.com/content/c62bea1f-2929-4473-838d-665dc6c45f83
Upplagd av Rolf Englund kl. 10/02/2022 Inga kommentarer:

US Housing Prices Fall for First Time Since 2012

To be sure, prices remain high.

The Case-Shiller national index jumped 15.8% year-over-year in July. The smallest gain since April 2021

Niall Ferguson - I am struggling to see that good trends outnumber bad ones...

... in the way that Summers and Pinker suggest.

The planet keeps getting warmer

In the US life expectancy is declining

Donald Trump could well be the Republican nominee in 2024

OK, I know, there are some good trends. For example, the unit costs of photovoltaics and batteries for electric vehicles have fallen substantially over the past two decades.

How is the trend in inflation around the world in any sense good? Thirty-seven countries now have double-digit inflation rates

Judged in terms of the growth rate of the money supply, the Federal Reserve made a bigger mistake last year than at any point between 1968 and 1979.

Increased conflict, ranging from proxy wars such as the one raging in Ukraine, to the risk of a full-blown nuclear Armageddon over Taiwan.

Once inflation rises above 5%, it takes an average of 10 years for it to return to 2%

In a recent research note Athanasios Vamvakidis, a strategist at Bank of America, analysed episodes of high inflation in advanced economies between 1980 and 2000.

Mr Vamvakidis found that once inflation rises above 5%, it takes an average of 10 years for it to return to 2%.

This suggests that the consensus view—that inflation in America will come down to 3% by 2024—may be too optimistic. 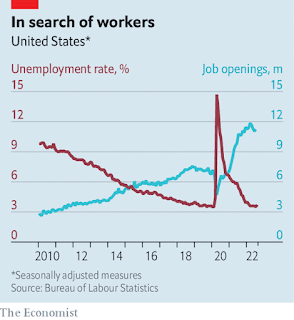 Runaway Bear Market Blows Past Everything 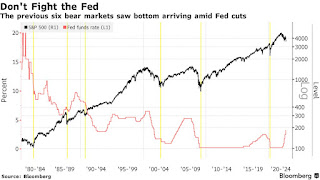 During the previous six bear markets, all bottoms formed when the Fed was lowering rates. That’s a long way off considering bond traders currently don’t expect Fed rates to peak until April 2023.

Down for a sixth time in seven weeks, the S&P 500 sank to fresh bear-market lows.

Notching a 25% decline in nine months, the benchmark index has now suffered its third-worst performance at this point of a year since 1931.

“The market is forced to reckon with the possibility that the central-bank put is not in place.”

Amid the relentless selling, bulls are yielding one after another. Retail traders, one of the most steadfast dip buyers since the 2020 pandemic crash, are bailing on stocks.

Short sellers are homing in on Cathie Wood’s pool of exchange-traded funds,

undeterred by the rising cost to bet against the Ark Investment Management family. 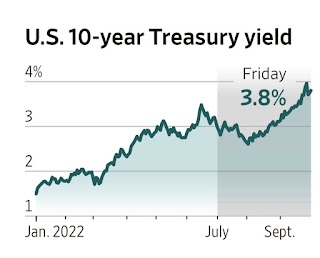 It is not the slave of some defunct economist, but a constantly evolving body of thinking and experimenting in the real world.

Far from every element of the “Washington consensus” — the economic orthodoxy of the 1990s — survived the Asian financial crisis in the latter part of that decade.

The lesson from 2010 to 2015, now accepted by the IMF, OECD and European Commission, is that there was a little too much focus on deficit reduction and austerity in the post-global financial crisis years.

Her Majesty’s question ("If these things were so large, how come everyone missed them?")

What is the “Washington Consensus? Did it fail?

They don’t want to be what investor Mark Kritzman calls “wrong and alone.”

Ms. Brainard devoted most of her speech to financial stability risks that central banks around the world could face as they raise rates rapidly, especially as many countries face very high inflation.

They may face added pressure to raise rates to prevent their currencies from depreciating as the Fed and others lift borrowing costs.

15 years on from the great financial crisis, there’s still plenty of risk in the market

The pandemic housing price surge may seem reminiscent of the 2000s bubble. But this time really is different, in a couple of ways.

Soaring prices in the 2000s were generally limited to coastal metropolitan areas where zoning requirements and NIMBYism often made it hard to build more housing.

This time, though, prices have soared everywhere

The good news is that one important source of recent inflation, especially high core inflation, may have reflected a one-time shift in people’s housing preferences in response to the pandemic and the changes it wrought rather than an overheated economy in general.

The bad news is that America’s housing affordability crisis has gotten even worse. 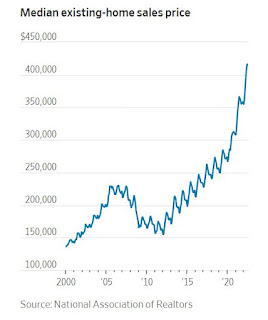 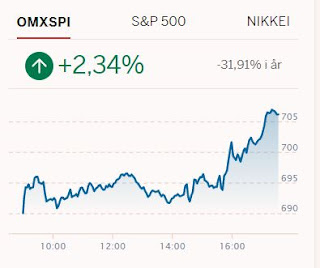 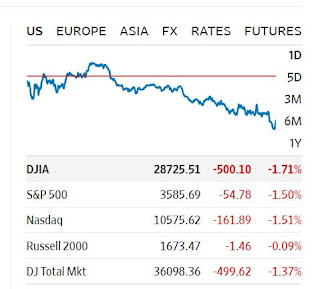 Market instability raising the chances of a pivot by the Fed

Overloaded debt in the financial system can spread like a virus

The Bank of England (BOE) is a current example of what happens when things go awry.

Fed doesn’t want to cause a recession. That may be a challenge for two reasons:

Fed remains focused on lagging economic data, such as employment, which are highly subject to future revisions.

Changes to monetary policy do not show up in the economy until nine to 12 months in the future.

After more than 12 years of the most unprecedented monetary policy program in history, the Federal Reserve has put itself into a poor situation.

Policy makers risk an inflation spiral if they don’t hike rates to quell inflation. If the Fed hikes rates to kill inflation, the risk of a recession and market instability increases. 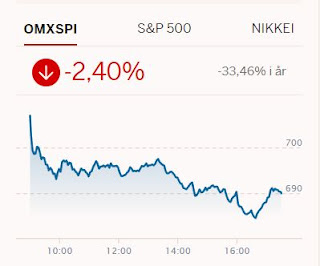 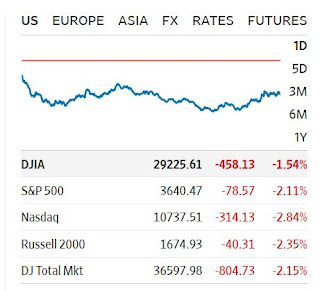 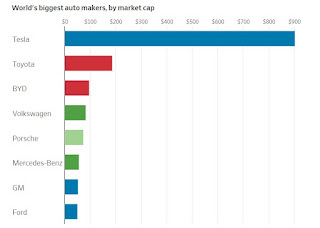 After years of keeping inflation below their 2% targets, the guardians of monetary stability have been caught napping at the wheel. The current G-7 average of 7.2% is way beyond the two-decade mean of 1.7%, the one-decade level of 1.6% or the 2002-2012 average of 1.8%. 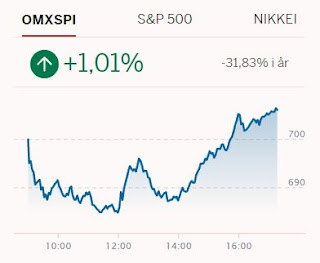 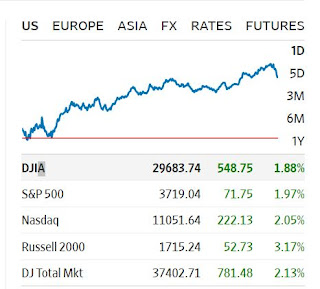 A wild run for global government bonds after the Bank of England stepped in to stop a rout in the U.K. gilts market, spurring a furious rally on both sides of the Atlantic. The sharp move  came just after the 10-year U.S. Treasury note had climbed above 4% for the first time in more than a decade
Upplagd av Rolf Englund kl. 9/28/2022 Inga kommentarer:

Some say it does not exist anymore, others that it never really did; Eurocrats speak of it in hushed tones, as if mindful not to wake a monster.

The Luxembourg Compromise holds that any national government can single-handedly derail any eu measure if it feels its “vital interests” are threatened.

The measure was crafted in 1966 to assuage Charles de Gaulle

The compromise is rarely seen in the wild; if anything its use is obliquely threatened behind closed doors.

Yet other such vetoes abound in Brussels. Most eu business now is agreed by a qualified majority of countries. But in several policy areas unanimity among member states is still needed. This includes anything relating to defence and foreign policy, enlargement, taxation and policing

On September 20th a meeting of the bloc’s Europe ministers looked at ways to veto-proof more of the eu’s business by increasing the use of qualified-majority votes. But because the proposal to move away from unanimity itself requires unanimity, it is unlikely to go anywhere.

As with the original compromise, there is no need to codify the Reverse Luxembourg in any treaty.

It is politically impossible to propose that now. But some day there will be a crisis and new instruments will be created."

Predictably, many politicians and pundits are howling in protest, warning of the risks of overkill

The nominal FFR, now effectively at 3.1%, remains five percentage points below the three-month average of the headline CPI inflation rate of 8%.

It is all but impossible to accomplish that objective with a sharply negative real FFR of around -5%.

With the real FFR at -5%, the Fed is not even close to being neutral, let alone restrictive.

They and the financial markets are underestimating the ultimate monetary tightening that will be required to return inflation to a 2% target.

A global recession next year is all but inevitable.

The worst bond rout in decades is drawing more investors to government debt, with JPMorgan Asset Management joining the growing camp of bulls.

Vij wagering on government bonds in the belief that the global economy will eventually buckle under the weight of aggressive rate hikes.

But with major central banks showing little inclination to ease the pace of tightening, they risk being saddled with outsized losses if the bets backfire.

-- despite increasing concerns about recessions in Germany and the 19-nation euro zone.

“We will do what we have to do, which is to continue hiking interest rates in the next several meetings,” she said.

“Our primary goal is not to create a recession. Our primary objective is price stability and we have to deliver on that. If we were not delivering, it would hurt the economy far more.” 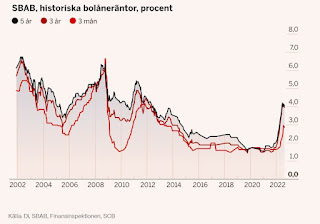 Fed Chair Jerome Powell said the bank “is strongly resolved to bring inflation down to 2%,

and we will keep at it until the job is done.”

Inflation may improve at times. The point is we aren’t going back to the halcyon days of 1% and 2% inflation for years

To bring price increases down to 2%, we may need to tolerate unemployment of 6.5% for two years.

without acknowledging how much economic pain it will cause.

The 2 per cent inflation target  came up repeatedly throughout the conference,

with economists suggesting that it may need to be adapted to fit a more fractured global economy.

Fed in 2020 announced it would target inflation at a 2 per cent average over time, in order to make up for past periods of undershooting the target.

Many economists advocated for a 3 per cent inflation target.

Fed’s Bullard Says Credibility of Inflation-Targeting Is at Risk

US dollar appreciated by 12 per cent Does it matter? What can be done about it?

Does the dollar’s strength matter?

Yes, it does, because, as a recent paper co-authored by Maurice Obstfeld, former chief economist of the IMF, notes, it tends to impose contractionary pressure on the world economy. 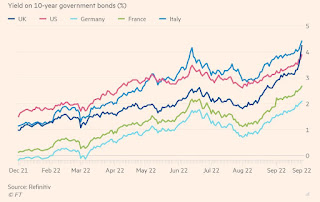 What can be done? Not that much.

Fed’s Bullard Says Credibility of Inflation-Targeting Is at Risk

Inflation targeting has been successful because it managed to anchor expectations — until it did not. 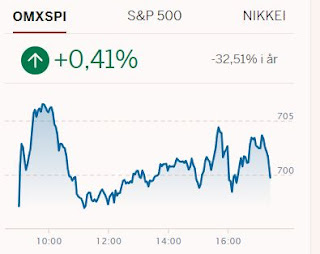 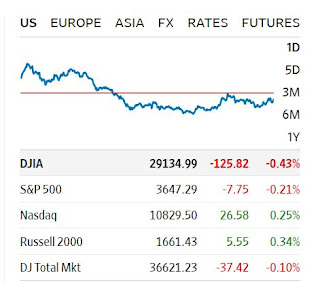 Porsche will raise €9.4bn and be valued at more than €75bn

Shares in Ferrari, the high-end marque that went public in 2015, trade at 30 times its projected earnings, while the trio of luxury fashion houses LVMH, Hermes and Christian Dior all trade between 20 to 40 times

By contrast, if Porsche sells shares in the middle of its range, investors will be paying roughly 15 times the carmaker’s projected earnings

The discount to Ferrari partly reflects one unavoidable fact: there are simply too many Porsches, stripping the carmaker of the scarcity premium central to the definition of luxury.

One sales pitch being made to investors is that Porsche offers “luxury with scale”, something a banker familiar with the IPO acknowledges is an oxymoron / a combination of contradictory or incongruous words (such as cruel kindness)/.