Outstanding: When do we decide that Europe must restructure much of its debt? By Michael Pettis · February 25, 2015

Greece and Europe, in other words, have a choice. They can choose to restructure Greek debt explicitly, with substantial real debt forgiveness and with the costs optimally allocated in a way that maximizes value for all stakeholders, or Greece can continue to struggle for many more years as the debt is resolved implicitly, with the costs allocated as the outcome of an uncertain political struggle.

Until one or the other outcome, the country is not a viable creditor and it will not grow.
Most people also understand that the Greek debate is not just about Greece but also about whether or not several other countries — Spain, Portugal and Italy among them, and perhaps even France — will also have to restructure their debts with partial debt forgiveness.

What few people realize, however, is these countries have effectively already done so once. This happened two and a half years ago at the Global Investment Conference in London when, on July 26, 2012, Mario Draghi, President of the European Central Bank, made the following statement....

It is important to understand why this was effectively a kind of debt restructuring.

With Draghi’s statement, there was an immediate transfer of wealth from the ECB — or, more appropriately from the group of countries behind whom the credibility of the ECB is maintained, and this means Germany above all — to the governments whose creditworthiness was in doubt.

A new generation of women is confident of its place in the laboratory so there’s no need to hound relics like Tim Hunt. How many of them wanted Sir Tim, a Nobel prize winner for his work on cell division, to quit his honorary professorship at University College London?

His was a voice from another age; the awkwardly conveyed experiences of a 72-year-old man, educated in the 1950s at the then all-male Magdalen College School and Clare College, Cambridge

I meet Sir Tims all the time. The more courtly ones call you “my dear” and open doors; the more lecherous look women appraisingly up and down in a blatant way younger men wouldn’t dare.

Moreover these young women holding pipettes, PowerPointing at conferences, writing computer code, clad in bio-hazard suits and protective goggles, were funny. “Check out my rack,” posted one beside a stand for test tubes. The very idea that, as Hunt argued, they were just cluttering up the place by falling in love and crying when criticised, was to them an uproarious joke.


Sir Richard Timothy "Tim" Hunt,  was awarded the 2001 Nobel Prize in Physiology or Medicine with Paul Nurse and Leland H. Hartwell for their discoveries of protein molecules that control the division (duplication) of cells, Wikipedia

Bloomberg editorial: It is Europe, as much as Greece, which is opposing a settlement

IMF in an awkward position, because its doubts on the sustainability of Greece's debts cut two ways.

Either Greece, burdened with massive unemployment, would have to raise taxes and cut public spending further;

or some of its debt would have to be written down.

It is Europe, as much as Greece, which is opposing a settlement
Bloomberg editorial, 12 June 2015


The IMF remains sceptical about Greece’s ability to meet the ambitious budget surplus targets and continues to seek assurances that eurozone governments would agree to restructure Greek debt — mostly now held by EU creditors — if a credible reform programme is not implemented.

IMF is also frustrated that the European side has been unwilling to address the issue of Greece’s debt pile seriously.
According to the IMF’s calculations, putting the Greek economy on a sustainable path now requires — at the very least — an extension of the maturities on Greece’s outstanding debts.
But European officials, wary of public opinion, have been reluctant to discuss even that.
FT June 11, 2015
Upplagd av Rolf Englund kl. 6/11/2015 Inga kommentarer:

If Europe cannot bend it will break
Germany’s tough approach is based on a realistic assessment of how hard it will be to get reforms through a 28-member EU — as well as a profound aversion to rolling back the process of EU integration.
But it is also an alarming commentary on Europe’s inability to respond to changed circumstances, whether it is a 25 per cent shrinkage in the Greek economy, or the unanticipated migration of millions of people across the EU.
Gideon Rachman, FT 8 June 2015

There will be no serious adjustments of policy, since it will just be too hard to agree what to do.
That kind of complacency is Europe’s default reaction to political revolts from the unenlightened masses, otherwise known as voters.
Gideon Rachman, FT May 26, 2014

Greek PM Alexis Tsipras: "We do not need an agreement. We need a solution"

Romer: a new trend in economics is polluting the discipline, names Robert Lucas

Romer, a professor at New York University, is worried that a new trend in economics — “mathiness” — is polluting the discipline. And he names names — including Robert Lucas and Edward Prescott, both Nobel laureates, and inequality guru Thomas Piketty.

In a follow-up comment, “Protecting the Norms of Science in Economics”, Romer says: “I point to specific papers that deserve careful scrutiny because I think they provide objective, verifiable evidence that the authors are not committed to the norms of science.”

But Romer’s attack is much more focused. He doesn’t mean that economics uses too much mathematics but that some economic theorists are pushing an ideological agenda and using fancy mathematics to disguise their intentions. They can redefine familiar words to mean unfamiliar things. They can make unrealistic assumptions. They can take hypothetical conclusions and suggest they have practical significance. And they can do all these things with little fear of detection, behind a smokescreen of equations.

If Romer is right, some economics papers are Orwellian Newspeak dressed up as calculus.

About Robert Lucas at IntCom

- Greeks accuse the IMF of violating its own rules by colluding in an EMU-led policy that leaves the country with unsustainable debts, skrev Ambrose Evans-Pritchard, 4 June 2015.

- Athens is implicity threatening to escalate the situation all the way to a full default to the IMF, setting off a grave institutional and political crisis within the Fund itself.

Ashoka Mody, a former IMF bail-out chief in Europe, said the Greeks are right to resist the demands.

“Everything that we have learned over the past five years is that it is stunningly bad economics to enforce austerity on a country in a deflationary cycle.

“Syriza should recruit the IMF’s research department to be their spokesman because they are saying almost exactly the same thing. The entire strategy of the creditors is wrong and the longer this goes on, the more it's going to cost them, as well as Greece."

They insist that the EMU creditor powers have ample means to resolve the crisis at any time they choose but are dragging their feet because they have yet to face up to the implications of their own monetary union.

Greece's onerous obligations to the IMF, the European Central Bank and European governments can be traced back to April 2010, when they made a fateful mistake. Instead of allowing Greece to default on its insurmountable debts to private creditors, they chose to lend it the money to pay in full.Ashoka Mody, Bruegel 21st April 2015

More about IMF and the eurocrisis here.


More about the eurocrisis here

Krugman: That 1914 Feeling - Europe seems to be sleepwalking

A forced Greek exit from the euro would create huge economic and political risks, yet Europe seems to be sleepwalking toward that outcome.


Sleepwalking into the Abyss


The euro was built on a Franco-German understanding but also on a typically European compromise. This gives France and Germany a particular responsibility to straighten what is crooked.

In the late 1980s we shared a common political project that was grounded in different economic ideals. Germany was marching towards unification and wanted to replace the defunct European monetary system with a harder fixed exchange rate regime built on the culture of the Bundesbank.

These projects served the broader purpose of European integration, but they overlooked critical flaws in the architecture of monetary union that need to be decisively addressed so that the euro fulfils its promise of economic prosperity and prevents Europe from slipping even more into division and discontent.

This convergence between member states would allow the creation of a preliminary eurozone budget, a feature of any functioning monetary union.

"It's time to strengthen the eurozone by way of the EU's biggest reform," Emmanuel Macron and his German counterpart Sigmar Gabriel said in a joint statement in France's Le Figaro, The Guardian, Germany's Die Welt, Spain's El Pais and other European dailies.

The German and French ministers also stressed that "a stronger eurozone should be the core of a deepened EU".

n Strasbourg on Dec. 9, 1989, after the Berlin Wall fell,
Germany agreed to monetary union in order to get President Mitterand to agree to German reunification
Wall Street Journal 23 Sept 2011

Sleepwalking into the Abyss 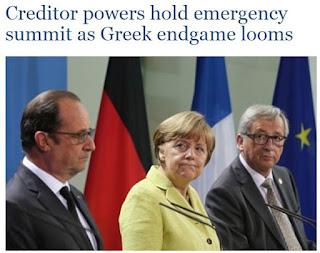