“Making the euro area collectively responsible for potential costs without member states giving up any national sovereignty over fiscal and economic policies would, sooner or later, make the currency union more unstable,” they wrote.

The experts’ report follows a claim in Der Spiegel that the German finance ministry was open to the idea of transferring German tax revenues to a eurozone budget.

German government officials said these discussions were at an early stage and would require treaty changes.

Marcel Fratzscher, president of DIW Berlin in FT:
The creation of a proper fiscal union is the most urgent reform

Marcel Fratzscher, president of DIW Berlin in FT: The creation of a proper fiscal union is the most urgent reform


Italy’s finance minister calls for ‘political union’ to save euro

A fiscal union should include a eurozone finance minister — an idea long favoured by Wolfgang Schäuble, Germany’s finance minister. Such a person would be accountable to a strengthened European Parliament with a new chamber for euro area issues.

He or she could have the right to intervene in national budgets if these violate European law, such as the fiscal compact, and have a budget financed through a European tax as an add-on to either the value added tax or the corporate tax of euro area member states.

The minister could have the ability to issue some jointly guaranteed debt within narrow limits. This ability to tax and borrow could be limited to two purposes: to provide unemployment insurance and to support investment.

Italy’s finance minister calls for ‘political union’ to save euro

Hans skriver att The point is that it wasn’t at all hard to see, right from the beginning, that currency union without political union was a very dubious project.

Italy’s finance minister calls for ‘political union’ to save euro

Italy is calling for a wide set of measures — including the swift completion of banking union, the establishment of a common eurozone budget and the launch of a common unemployment insurance scheme — to reinforce the common currency.

He said an elected eurozone parliament alongside the existing European Parliament and a European finance minister should also be considered.

The Italian finance minister is confident this is the right path for the eurozone, but he is not certain it is a winning battle. Many eurozone governments, including Italy, are facing pressure from people who are increasingly sceptical about the merits of existing European economic integration, let alone the possibility of more to come.

"I am sure the euro will oblige us to introduce a new set of economic policy instruments. It is politically impossible to propose that now. But some day there will be a crisis and new instruments will be created."
Romano Prodi, EU Commission President. Financial Times, 4 December 2001

Jag citerar: ”When the euro was born everyone knew that sooner or later a crisis would occur. It was inevitable that, for such a bold and unprecedented project, in some countries (even the most virtuous ones), mistakes would be made and unforeseeable events occur.”

Krugman: Who could have foreseen the huge problems the euro would eventually cause? Actually, lots of people., /but not Jonung/

In January 2010 two European economists /Lars Jonung and Eoin Drea/ published an article titled “It Can’t Happen, It’s a Bad Idea, It Won’t Last,” mocking American economists who had warned that the euro would cause big problems.

The only big mistake of the euroskeptics was underestimating just how much damage the single currency would do.

The point is that it wasn’t at all hard to see, right from the beginning, that currency union without political union was a very dubious project. So why did Europe go ahead with it?

Mainly, I’d say, because the idea of the euro sounded so good. That is, it sounded forward-looking, European-minded, exactly the kind of thing that appeals to the kind of people who give speeches at Davos.

Such people didn’t want nerdy economists telling them that their glamorous vision was a bad idea.

RE: Currency union with political union is an even more dubious project.

See "ever closer union" - The United States of Europe

Bill Emmott, a former editor of The Economist: Eurozone is happy to back Berlin when it is wrong and resist it when it is right, FT July 21, 2015

Bill Emmott, a former editor of The Economist and executive producer of the ‘The Great European Disaster Movie’, FT July 21, 2015

What I mean by “right” is the view expressed by Wolfgang Schäuble, Germany’s finance minister, that Greece should leave the euro, both for its own sake and that of the single currency itself. And even if you don’t think it is right, it is certainly logical.

It is hard to find a better definition of “wrong” than the fiscal pact of 2012, which mandates a universally tight fiscal stance in the eurozone, regardless of whether a country has an affordable level of public debt, regardless of the cost of borrowing and regardless of the state of aggregate demand, and which simultaneously rejects any idea that countries with large current-account surpluses bear any responsibility for adjustment.


For unreconstructed efficient market theorists, bubbles do not exist.

For semi-reconstructed ones, they exist but, as former Federal Reserve chairman Alan Greenspan claimed in the late 1990s, they are perceptible only after the fact. To spot a bubble in advance, he declared, requires a judgment that hundreds of thousands of informed investors have it all wrong.

Given that many spotted the dotcom bubble in advance and identified the property bubble before the credit crunch of 2007, the semi-reconstructed position seems almost as eccentric as the out-and-out efficient market stance.

The eccentricity is further underlined by the fact that 2015 has witnessed two of the most readily detected bubbles in history.

Martin Wolf: There are no /Greek/ government deficits to finance consumption (or almost none). So money would be used to pay interest and amounts due.

There are no government deficits to finance consumption (or almost none). So money would be used to pay interest and amounts due.

I mailed him and asked:

How much money will Greece use to roll over old loans?
And how much is used to pay gov deficits for consumption?
I am a bit ashamed not to know this.
Upplagd av Rolf Englund kl. 7/09/2015 Inga kommentarer:

Where did all the money go?
http://www.macropolis.gr/?i=portal.en.the-agora.2080 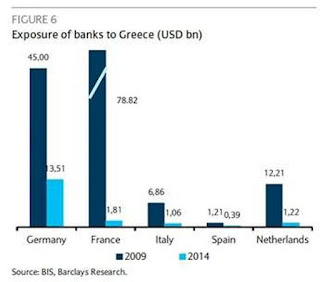 The second error of the Yes campaign was a failure to explain how the bailout programme could work economically.
This is not a debate between Keynesian and neoclassical economics, the kind that keeps us endlessly busy on these pages.

The Greek referendum united economists with very diverse views of how the world works, including Paul Krugman, Jeffrey Sachs and Hans-Werner Sinn.

There is no reputable economic theory according to which an economy that has experienced an eight-year-long depression requires a new round of austerity to bring about economic adjustment.

“Soon after the announcement of the referendum results, I was made aware of a certain preference by some Eurogroup participants, and assorted ‘partners’, for my… ‘absence’ from its meetings; an idea that the Prime Minister judged to be potentially helpful to him in reaching an agreement. For this reason I am leaving the Ministry of Finance today,” he wrotein a blogpost, explaining his resignation.


An Oxford-educated economist, Mr Tsakalotos has much in common with the political elite of Westminster, studying politics, philosophy and economics (PPE) as an undergraduate before completing his PhD in economics at Oxford in 1989.
The 55-year-old, who was born in Rotterdam, currently serves as the chief economic spokesman and effective shadow finance minister for the Syriza-led government.

IMFs oförlåtliga misstag: we failed to realise the damage austerity would do to Greece