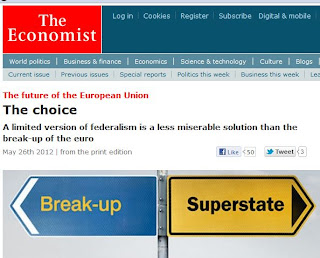 For two crisis-plagued years Europe’s leaders have run away from this choice. They say that they want to keep the euro intact — except, perhaps, for Greece.

But northern European creditors, led by Germany, will not pay out enough to assure the euro’s survival, and southern European debtors increasingly resent foreigners telling them how to run their lives.

Only if Europeans share a sense of common purpose will a grand deal to save the single currency be seen as legitimate.

Only if it is legitimate can it last.

If it is to banish the spectre of a full break-up, the euro zone must draw on its joint resources by collectively standing behind its big banks and by issuing Eurobonds to share the burden of its debt.

Rumours of bank runs around Europe’s periphery have put savers and investors on alert (see article).

The euro zone needs a plan.

More likely, a break-up would take place amid plunging global share prices, a flight to quality, runs on banks, and a collapse in output.

Capital controls are illegal in the EU and the break-up of the euro is outside the law, so the whole union would be cast into legal limbo.

Is the euro really worth saving?

Even the single currency’s diehard backers now acknowledge that it was put together badly and run worse.

There would be so many people to blame: Eurocrats, financiers, intransigent Germans, feckless Mediterraneans, foreigners of all kinds. As national politics turned ugly, European co-operation would break down.

That is why this newspaper thinks willingly abandoning the euro is reckless.

A rescue is preferable to a break-up.

Fear that the state could not cope makes a banking collapse more likely. That is why we have reluctantly concluded that the nations in the euro zone must share their burdens.

For people like Germany’s finance minister, Wolfgang Schäuble, the single currency was always a leg on the journey towards a fully integrated Europe.

Voters will be scared into grudging acquiescence precisely because a euro collapse is so terrifying.

We shall never surrender