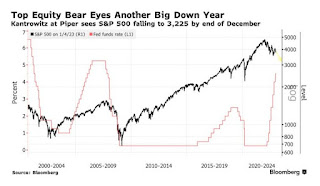 As it takes time for higher borrowing costs to work through the economy, he argues, the hit to corporate earnings is likely to extend well into next year.

The bleak view stands out in a crowd where many expect the bear market to reach a bottom during the first half before mounting a recovery.

The average year-end target among strategists surveyed by Bloomberg in December sees the S&P 500 rising 6% to 4,078.

There is a lot of unfounded optimism

One question dominates the rest. Is the worst over?

Goldman Sachs’s researchers think share prices will fall in the near term, but recover by the end of the year.

If this year offers a repeat of 2022, with heavy losses for both stocks and bonds, it will be an unusual one.

Even so, there are reasons to believe more pain lies ahead. The first is that shares, relative to their underlying earnings, remain expensive by historical standards.

Moreover, today’s valuations were reached during an unusual period: one in which central banks pumped endless liquidity into the market via quantitative easing (QE).

(Almost) Everything Wall Street Expects in 2023