What was once driven by goods prices and energy is now above all about services (which include the costs of shelter), along with erratic costs of food 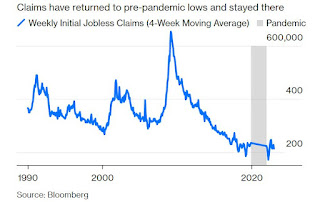 The Fed’s favored statistical measures for underlying inflationary pressure all confirm a decline, although the fall is less than it appears from the headline data.

Does the peak rate for fed funds matter that much?

Steve Sosnick, chief strategist at Interactive Brokers, suggests the answer is no. He said:

I'm less concerned about the level of the terminal rate than what happens after we get there. Whether it’s 4.75% or 5.25% isn't all that meaningful. It’s a lot higher than it was, and quite frankly much more in line with long-term historical levels than the artificially low rates we’ve gotten used to.

Overall inflation declining slightly, but still above 6% — a level it had not reached in its 25-year history until 2022. But real wage inflation is still negative: