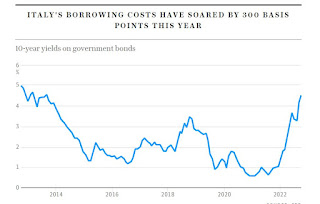 This is the third time since the launch of the euro that the ECB has tightened aggressively after a recession has already begun, validating the adage that central banks are always and everywhere behind the curve.

It did so in July 2008 in response to record oil prices, violating the canonical Bernanke-Gertler doctrine that policy-makers should “look through” imported commodity shocks, which are deflationary for the rest of the economy, ceteris paribus.

Three months later, half of the western banking system was in ruins.

Robert Hetzel, then at the US Federal Reserve, argues in The Great Recession: Market Failure or Policy Failure? that the ECB acted as an accelerator in the chain-reaction that was to unfold.

Its policy error heightened currency stress and sent tremors through the interlinked global credit markets at a dangerous moment.

Inflation is 10.1pc in the eurozone, 11.3pc in Germany, 12.6pc in Italy, and over 20pc in the Baltic states, again whipsawed by a one-size-fits-all monetary policy that is wildly inappropriate for their needs.

The eurozone does not meet the definition of an optimal currency area under standard Mundell theory and it is little closer today than it was at the launch of EMU a quarter century ago.

Europe’s impetuous politicians created a monetary union that is inherently prone to fundamental clashes of interest.

The era of QE and secular stagnation has disguised these design flaws for the last decade.