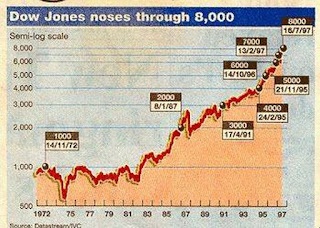 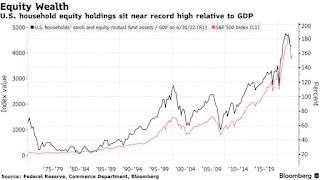 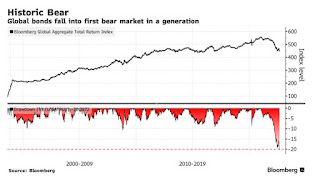 Global Bonds In First Bear Market in a Generation
Bloomberg index drops 20% from its January 2021 peak
In many ways the economic and policy realities now facing investors hark back to the 1960s bear market for bonds, which began in the second half of that decade when a period of low inflation and unemployment came to a sudden end.
As inflation accelerated through the 1970s, benchmark Treasury yields surged. They would later hit almost 16% in 1981 after then Fed Chair Paul Volcker had raised rates to 20% to tame price pressures.
Bloomberg 2 september 2022
https://www.bloomberg.com/news/articles/2022-09-02/global-bonds-fall-into-first-bear-market-in-a-generation
Likely to be missing from discussions will be any mention of 2021
Consumed by this year’s challenges, we’ve all but forgotten the wild excesses that preceded them: the retail investor frenzy that drove up obscure stocks such as GameStop to extreme heights, how some $18tn of bonds were trading at one stage with negative yields, the rush to invest in blank-cheque Spac investment vehicles.
Remember dogecoin, a cryptocurrency designed as a joke that surged 15,000 per cent before crashing?
This may seem like an uncomfortable walk down memory lane, but it wasn’t all that long ago that pundits were suggesting we were at the climax of an “Everything Bubble”. And there are reasons we should keep such times in mind.
The first is the possibility that this year’s well-rationalised market drop is nothing more than the beginning of the Everything Bubble Burst, with recent gains an interlude in a broader bearish trend.
Today’s balanced portfolio construction practices presume asynchronous markets — that stock and bond prices, for example, move in opposite directions. They never anticipated a synchronous peak in stock and bond prices
Peter Atwater FT 23 August 2022
https://www.ft.com/content/ad458a6c-6cd6-4452-a64f-7541588d9e51
The writer is an adjunct lecturer at William & Mary and author of the forthcoming book “The Confidence Map”