Sweden and Switzerland, which kept their freely floating currencies in 1999 and continued to grow as before


Since the launch of the euro in January 1999, Germany and the Netherlands have experienced a growth slowdown and loss of wealth for their citizens that would not have happened had they never joined the euro.

We know this to be true, because we can compare the progress of these two Northern European economies with that of Sweden and Switzerland, which kept their freely floating currencies in 1999 and continued to grow as before. 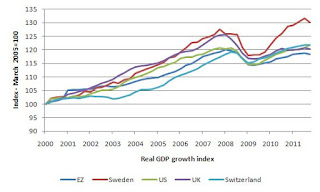 Charles Dumas writes:
No wonder the Germans and Dutch are angry. But their anger should be directed at the governments that took them into the euro, not at the hapless citizens of Mediterranean Europe, who now are also suffering the effects of the common currency.