A picnic in a meadow on the Hungarian-Austrian border enabled the first exodus from behind the Iron Curtain. Unintentionally — or not? 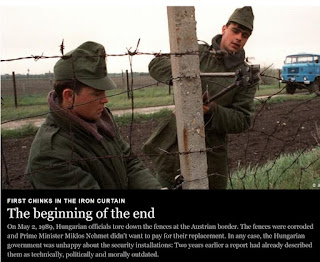 Even 30 years on, the question of who orchestrated the events of August 19, 1989, remains unanswered. Was it the newly formed Hungarian opposition? Or the Kaiser's son, in absentia?

Otto von Habsburg was represented at the picnic by his daughter, Walburga. Or the secret service? Or perhaps some combination of all three?

The undercover role of West Germany's intelligence service and other security services is now regarded as an open secret.

Walburga Habsburg Douglas: 'We knew the Iron Curtain could fall'

From 1916 to 1918, my father was crown prince of Austria-Hungary, so he was an important man. But since he didn't want to be the center of attention and the event was aimed at discussing what role Hungary should play in Europe in the future, he sent me to the border as a representative of the Pan-European Union.

I had already asked the Hungarian government for permission.
Together, Minister of State Imre Pozsgay and my father sponsored the project.